The Order of Santiago

The Order of Santiago conquered much of the present Tagus river’s southern Portuguese territory, and was essential in the settlement and socioeconomic planning of Alentejo and Algarve’s swaths during the Middle Ages.

The origins of a peninsular military religious order
The Order was born of the crusading fervour that gripped the medieval imagination, buoyed by the conquest of Jerusalem in 1099 and other successful campaigns in the Holy Land. In the 12thcentury, Muslim strongholds were also being conquered by

Western European kingdoms across the Iberian Peninsula. In the kingdom of Portugal, the Orders of the Templars and Hospitaller Knightswere already active, to whom the kings D. Afonso Henriques and D. Sancho I had entrusted the defence of important areas of the country’s center. The Order of Santiago was the last to be established, but quickly supplanted the others in scale, dynamism and relevance.The Order wasn’t founded with that name. It originated among the friars of Cáceres, consisting of thirteen warrior-priests who came together in the second half of the 12th century whom King

Fernando II of Leon recognised as a militia in 1170. Some time after, probably in common accord with the archbishop of Santiago de Compostela, or because Santiago (Saint James) the Apostle was the Kingdom of Spain’s patron, the friars then adopted the name Order of Santiago. The uniquely peninsular scope of the Order was evident in its statutes: to protect not only the southern borders of the Iberian Peninsula’s Christian kingdoms, but also the pilgrims who came to Santiago de Compostela cathedral to worship the apostle’s tomb. Its seat was established in Uclès (Cuenca) from 1174 onwards.

The Order of Santiago in Portugal
In Portugal, the oldest documents on the Order of Santiago date back to 1172, the year in which it inherited the territory of Arruda dos Vinhos from King D. Afonso Henriques. In a short space of time, it went south of the Tagus river to actively participate in the kingdom’s war efforts. The Order settled in the castle of Palmela in 1186, but the Islamic reconquest of 1191 interrupted the construction of a convent there. The town once again became the Portuguese Santiagan capital until Alcácer do Sal was finally conquered in 1217, and for a

third time from 1482 onwards, a moment when ‘land-taking’ was a thing of the past and a closer proximity to the court was advisable.The military influence of the Spatharii dominated the first half of the 13th century. After having conquered the important port of Alcácer do Sal (the main shore base for the Muslim fleet), the Order of Santiago was entrusted with conquering practically the entire south of what today is mainland Portugal, under the command of future Grand Master D. Paio Peres Correia. In just two decades, the Order of Santiago became the most 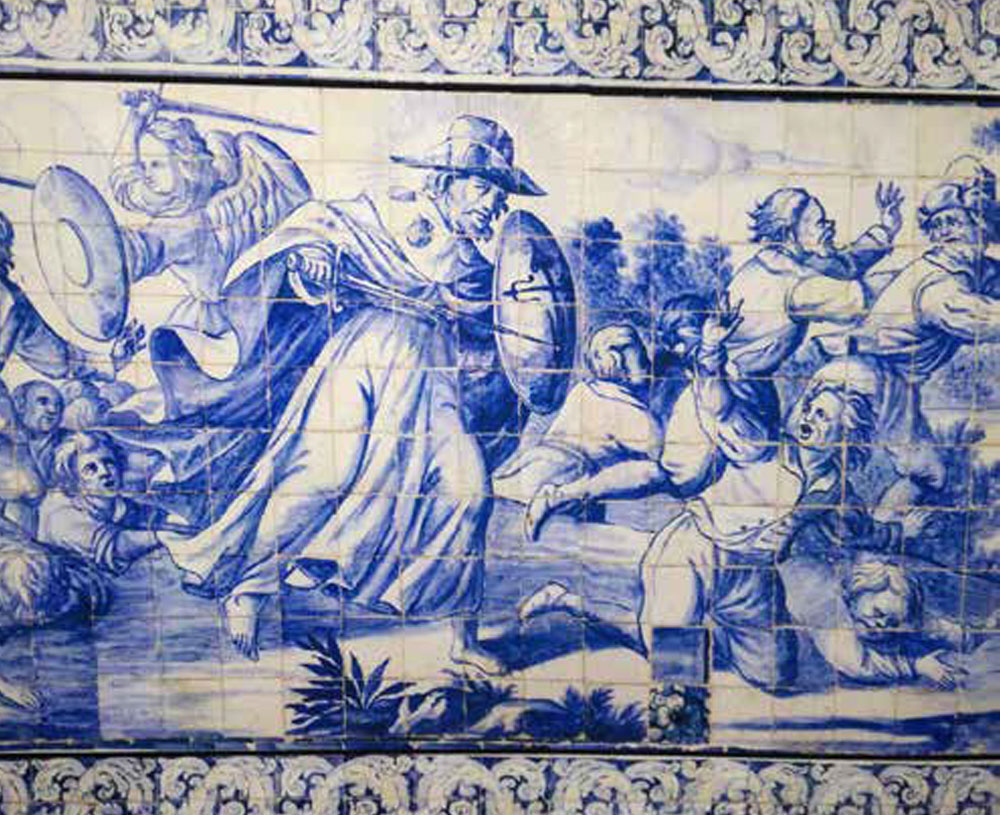 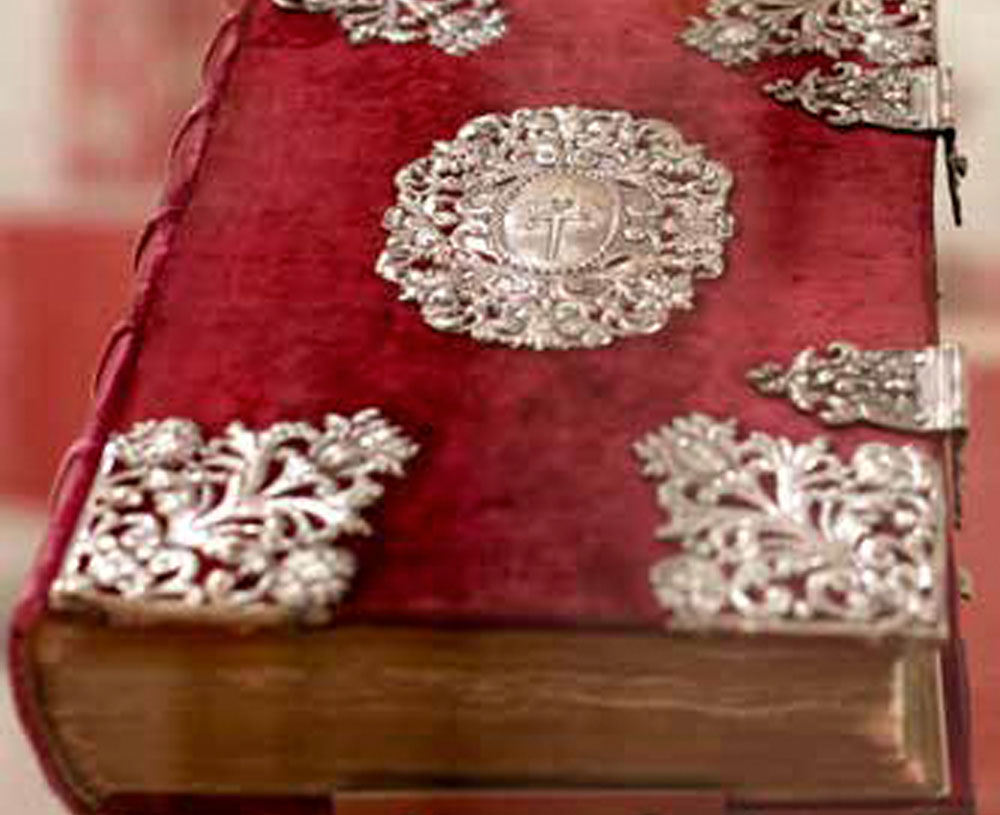 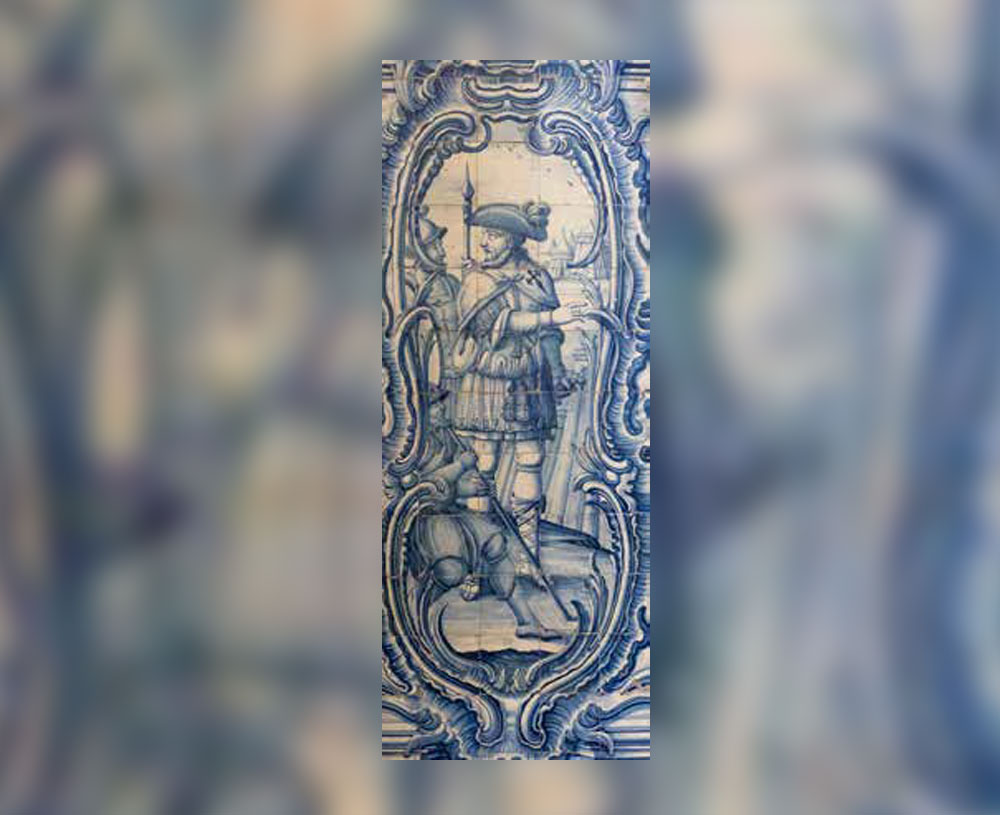 powerful landowner of the kingdom, holding sway over a territory so vast it extended from Samora Correia to Tavira, and from Almada to Aljezur.To provide support for its manoeuvres in the south, the Order’s seat moved to Alcácer do Sal and then Mértola. The true capital was Alcácer do Sal, where the Spatharii built a grand convent, known in medieval literature as the ‘meysom d alcaçar’, next to the castle and mother church. In Mértola, where the Portuguese ancillary’s seat was established between 1248 and 1482, the architectural legacy of commander D. João

de Mascarenhas is best-known. In the first half half of the 16th century, he was patron for the construction of a grand altarpiece for the main church (originally the mosque) which celebrated the life and legend of the Apostle Santiago.In the south of the country, the vast quantity of churches dedicated to Santiago came about thanks to the conquests and administration of the Order of Santiago, which also left many further traces such as palaces of its former Commanders, castles preserving the memory of the knights who conquered them, the tombs of celebrated men

of war and religion, works of art sponsored by high-ranking noblemen of the Spatharios hierarchy, structural traces on local toponyms or simple and discreet landmarks in properties.Given the military nature of the campaigns in the Alentejo and Algarve, many artistic commissions portrayed Santiago as a Christian warrior on horseback, showing no mercy to a huddle of terrified foes, which became known as the religious iconography of Santiago Matamouros(Saint James the Moor-slayer). In truth, the Order never imposed a single form of representation and Santiago continued to frequently 

be represented as a pilgrim and apostle, with the south of the country revealing the most complete narratives on its life in azulejo (tile) panel.

Management and integration into the crown’s estate
The Order was presided over by a grand master, elected by 13 knights, in memory of the 12th century founding members. Religious discipline was upheld by a superior religious officer (prior-mor), while the management of the commendations was the responsibility of a chief knight commander (comendador-mor). The commendation was the basic

constituent of the administrative land management of the Order of Santiago, headed by a main castle. For the same reason, the commanders were also the alcaldes of these fortresses. The Order of Santiago in Portugal was runned by the grand master of Uclès until 1452, the year in which the Portuguese ancillary gained autonomy from its Castilian counterpart. During the reign of the King D. João III, from 1551 onwards, the Order was integrated into the crown’s estate and was subsequently managed by the Portuguese monarchy.

The cross of the Order of Santiago
The cross used by the friars of Santiago is red and has two sidebars in the shape of fleurde-lys, while the vertical tail resembles a sword. The banner was white and, besides the cross, it depicted scallop shells, the emblematic symbol of the Jacobean pilgrims. 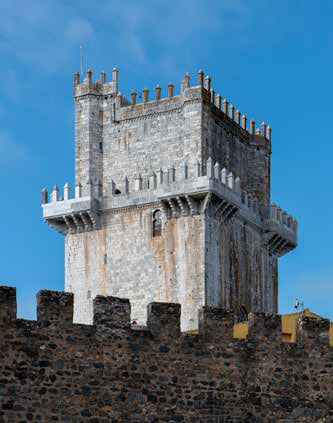